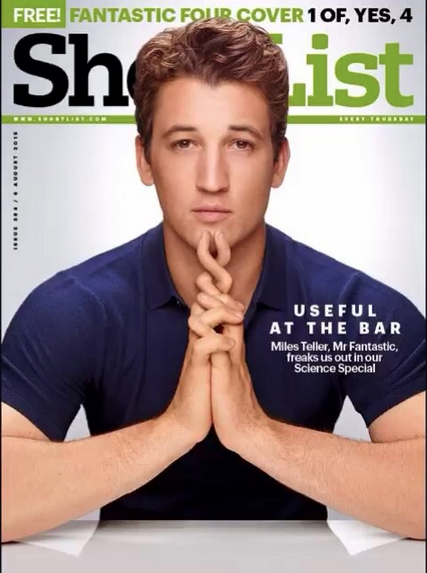 In a new interview for Shortlist Magazine, the Fantastic Four cast demonstrate their super powers with the magazine photoshots. Miles Teller is the number one to talk about, of course. Thank you to Miles Teller News for the cover photo!

Read Miles’ interview down below, and don’t forget to catch Fantastic Four tomorrow night at you local theater:

“REALLY BEING IN THE FANTASTIC FOUR WOULD BE TRAUMATISING”

There are five decades of Fantastic Four comics – did you work your way through them?

To a point. Obviously there are elements of them in the film, because we’re not in denial about the source material. It was cool to read what happens to Mr Fantastic down the line, but you have to do your film.

You know, my arm can’t stretch that long, believe it or not. But I have to be emitting some emotion – you can’t do it with a blank face. It’s an absurd thing to have happen to you, but you want to play it as real as you can.

There’s definitely some of the body-horror stuff. If you’re a young guy and all of a sudden you’re covered in rocks or you’re in this elastic form and you can’t control it, that would be kind of traumatising. What we’re doing with this movie, it’s more gritty and real – it’s not just super-fun and flying around blowing stuff up. Although there’s plenty of that, too.

Reed is a science prodigy – were you into science growing up?

I wasn’t overly into science, but I was an academic kid. I was in all the honours classes, so academics was something pretty important to me and something I had a good hold on.

And you grew up in the manatee capital of the world?

Sure. I moved there when I was 12. It was one of these small towns, in a place called Citrus County, Florida, on the Gulf Of Mexico. There was a lot of nature and wildlife and yes, it was the manatee capital of the world. They’re the big local celebrities, not me – people go there to see them, not where I grew up. It’s a reminder of my station in life.

You got a huge amount of attention from Whiplash – did you feel a shift?

I guess I can judge how much people are interested in me by how many paparazzi are following me around. There’s been more and more recently. But the important thing to me was, when Whiplash came out, I had a lot of actors who I really respect and admire come up to me at film festivals and say how much they enjoyed it. That was pretty amazing.

Do you get bothered by the paparazzi hassle?

It’s a pretty gross profession – they’re really trying to get photos of you in compromising positions. They’re rarely there when you’re doing something good or heroic, they want a picture of you wasted, or if I’m with my girlfriend they want a picture of her. It’s a weird thing – do I cover my face, or let them get their picture and leave? The problem is when they get their picture and just hang around.

Read the other cast’s member’s interview by going to Shortlist Magazine.